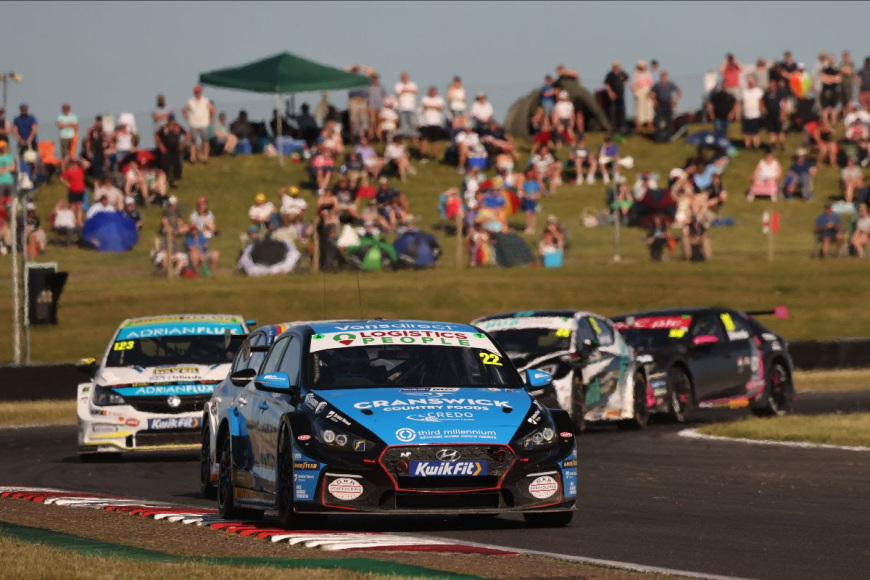 FPZERO Simulators partner EXCELR8 with TradePriceCars.com team was able to celebrate a stunning breakthrough win as the Kwik Fit British Touring Car Championship headed for Snetterton for the second meeting of the campaign.

The team made the short trip to its home circuit buoyed by a podium finish in the season opener at Thruxton last month, with hopes high that all four drivers would be able to impress at the wheel of their Hyundai i30 Fastback Ns.

In sweltering weather conditions, the weekend started well in practice as Tom Ingram put his car on top of the times with the fastest lap, which was posted in the opening session of the weekend.

Chris Smiley also showed solid pace to run inside the top ten, with Rick Parfitt and Jack Butel displaying encouraging speed to take into the first two-part qualifying session of the campaign.

The opening 25 minutes of qualifying would determine which ten drivers were able to go through to Q2 and the fight for pole, with Tom setting the second past time to earn his place in the showdown. Chris would go close to joining him in the session as he posted the eleventh best time, with Jack and Rick lining up 25th and 26th having set near identical lap times.

In the all-important showdown session itself, Tom posted the third best time but was later promoted onto the front row when pole position man Gordon Shedden was excluded from the results.

With fans trackside for the first time in more than 18 months, the opening race would see Tom secure his second podium of the year in second place, with the two-time Independents’ champion heaping pressure on Colin Turkington during the early stages before settling for a strong haul of points towards his championship tally.

Chris would hold position through the opening lap before battling ahead of the Honda of Dan Rowbottom on lap two, with the Northern Irishman then retaining the position right through to the finish for his first top ten of the campaign.

A strong opening race for Rick saw him finish in 24th place with Jack in 26th; the pair spending much of the race battling together on track for position.

Carrying extra weight on his car for race two, Tom would slip back to fourth in the early stages and then spent the whole race fighting to try and find a way back ahead of Ollie Jackson’s Ford before crossing the line just outside the podium spots.

Chris looked set to match his result from race one but missed out on the top ten by less than a tenth of a second, before a one second time penalty for gaining an unfair advantage dropped him to 13th in the final results. Jack made solid progress through to 22nd place although Rick dropped off the back of the pack after getting caught up in an incident on the opening lap.

However, his race pace was shown by the fact that he was able to bring down a gap of over eleven seconds to the car in front down to seven before the chequered flag dropped.

The reverse grid final race saw Tom starting in fourth, but a good start saw him move up into third and he then took second place from Tom Oliphant on lap two. Fighting hard to get ahead of Stephen Jelley, Tom established a small lead at the front over the chasing pack behind and was rewarded with his first victory of the season and the first win for the team in the series.

Chris would find himself running in the pack on the fringes of the top ten and picked up his third points finish of the weekend in eleventh spot, whilst Jack enjoyed his most competitive race of the weekend as he took 21st - having driven well in the early stages to keep the BMW of Tom Chilton at bay. Rick meanwhile ended his weekend with a trouble free run to 24th.

Chris Smiley, #22 Ginsters EXCELR8 with TradePriceCars.com Hyundai i30 Fastback N, said:
"I've been in running in the pack all day and we had the pace to run there, but didn't quite have the extra little bit to try and make progress forwards. It was difficult unless you had a big pace advantage and it was only the people who had that advantage who were able to make up a lot of places. Everyone in the races around us pretty much stayed where they were all weekend unless they made a mistake or went off, so we just need to work to make sure we can extract the maximum from the car, as Tom has been able to do today."

Rick Parfitt, #62 EXCELR8 with TradePriceCars.com Hyundai i30 Fastback N, said:
"I was really pleased with the pace that I showed in the first race of the weekend and it was unfortunate in race two that I got squeezed onto the grass on the first lap and caught up in the melee that followed. After that, the speed was good and I closed in a bit but in race three, I was suffering with understeer and also didn't quite have the pace on the straights. I was being held up a lot which was a bit frustrating, but I think my race pace had been strong and I just need to focus on getting higher up the grid in qualifying.

Tom Ingram, #80 Ginsters EXCELR8 with TradePriceCars.com Hyundai i30 Fastback N, said:
"There are some amazing moments to look back on this weekend, and to get the first win for EXCELR8 at the team's home circuit is great - and particularly with fans at the track again. We have really smashed it this weekend in terms of points which is a big thing as we have moved up in the standings, and hopefully we can only go forwards from here. I'm lucky to have been able to take a few wins in the BTCC in my career and that one feels special. I can't thank everyone at Ginsters EXCELR8 with TradePriceCars.com enough as it was a real team effort."

Jack Butel, #96 EXCELR8 with TradePriceCars.com Hyundai i30 Fastback N, said:
"We have learned a lot again this weekend and I think have been able to continue the progress we made at Thruxton. The team has been happy once again with how I have performed, which is important, and to end the weekend close to a top 20 finish is good when you consider how strong the field is this season. I feel now that I'm starting to come to terms with the Hyundai and how it is different to what I have raced before and I hope to maintain this progress when we get to Brands Hatch."

Justina Williams, team owner, said:
"I'm absolutely over the moon with us getting a win this weekend. I knew that it was coming at some point but I wasn't sure if would come this early in the year and I'm delighted for the whole team - it's hard to really find the words to express how I feel. There has been so much work that has gone in to this and to get our first win at our home track is extra special. Tom has done a great job to get the win but Chris, Jack and Rick have also driven well this weekend. It's nice to see Chris get three solid finishes on the board after round one, and I think both Jack and Rick can go away from this weekend knowing that top 20 finishes - and then points - aren't far away."