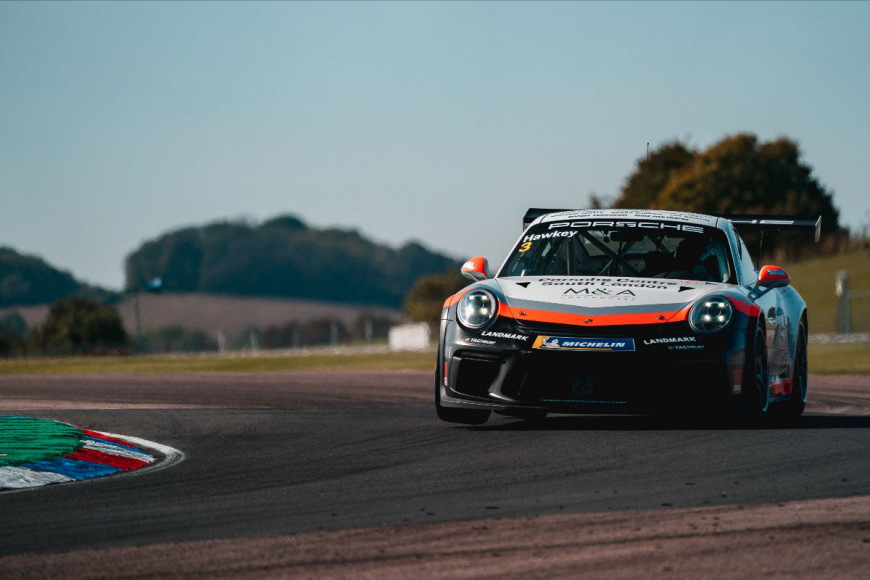 Esmee Hawkey enjoyed a successful visit to Thruxton in the Porsche Carrera Cup GB as she claimed pole position and two wins to extend her championship lead to 11 points.

Coming into the high-speed Hampshire circuit on the back of two disappointing weekends, the 22-year old reasserted her hold on the Pro-Am Drivers’ standings with a maximum haul of points and her sixth and seventh wins in just ten races so far this season.

On a weekend where rival drivers suffered a host of punctures owing to the abrasive nature of the circuit, combined with high speeds and debris on track, Esmee drove mature and assured races to avoid drama and bring home victories in both contests, making some good overtakes and demonstrating her ultimate speed with a fourth-place finish overall in race two.

With another period of back-to-back race weekends, Esmee will return to action in the Porsche Carrera Cup GB at Silverstone over September 25-27, competing on the venue’s National circuit configuration. After free practice sessions on the Friday, qualifying and the first of two 28-lap races will be held on Saturday, with the final contest live on ITV4 on Sunday, September 27, at 12:45.

There are still a few places left for fans to race along with Esmee this season by becoming one of her Silver Supporters, which means their name will displayed on the roof of her Porsche 911 GT3 Cup Gen II machine, as well as being sent a signature cap and signed photograph.

Supporters will also be entered into a draw to win hot laps with Esmee in either her Carrera Cup Porsche 911 GT3 Cup car or a Porsche Cayman 718 GT4 Clubsport. Head to www.esmeehawkey.com for further details.

“I wasn't overly happy after free practice as I was quite a bit off the pace compared to Harry [King] and Josh [Webster], so I had a lot to learn from them. It’s a tricky circuit which is fast and flowing and it takes a lot of guts to get a quick lap time out of the car. We made some changes for qualifying, and it was better so we  improved our time, but I knew I had a little bit more in me.

“I had to manage the tyres for race one because Thruxton is an abrasive circuit, especially as I saw Harry had a blowout at the end. I had some good battles early on and put a nice move on [Aaron] Mason to get the Pro-Am lead but then was kind of in my own space with no one to fight with, so I kept it clean and brought the car home.

“Race two was quite hectic for other drivers, but not for me! I tried to stay off the kerbs to avoid any tyre issues and it was a bit easier as my main Pro-Am rivals came together in race one, so they were at the back of the grid. I moved forward and had a good battle with [Mark] Kimber: I got a good run out of Church and passed him into the chicane, so it was a positive race and we finished fourth overall and first in Pro-Am.

“From being disappointed on Friday to leaving with two wins I think we’ve done well, both with myself and the car, and it’s good to stretch the championship lead over Ryan [Ratcliffe]. I’m looking forward to Silverstone where the battles will be close once again, so hopefully we’ll have a good scrap and keep extending the points lead.”