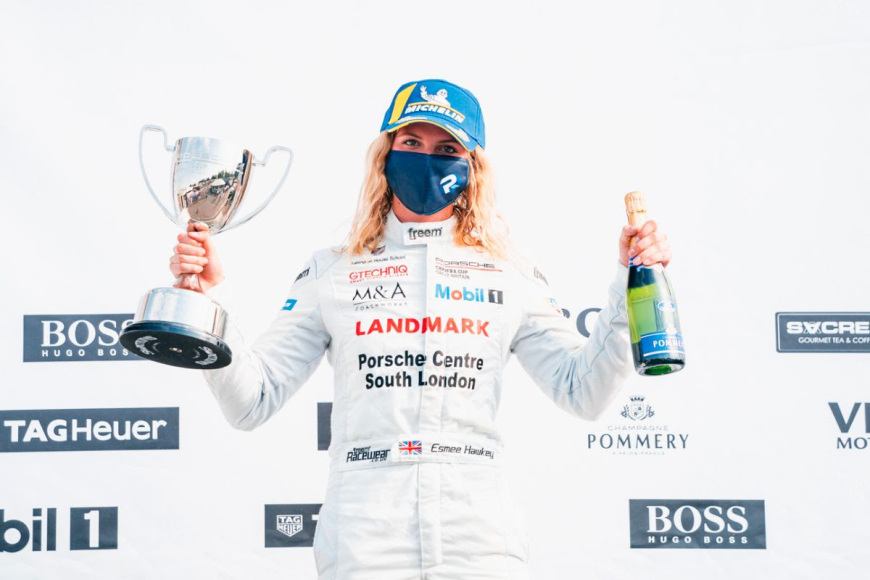 Esmee Hawkey continued her perfect start to the Porsche Carrera Cup GB season with two victories in Pro-Am and another overall podium to extend her championship lead at the weekend (August 7-9).

Normally looking forward to racing in front of friends and family at her local circuit of Brands Hatch, the Kent-based racer had to contend with being followed on TV, but performed superbly, recording a second overall podium after achieving the impressive feat at Donington Park last time out.

Racing under blue skies and scorching temperatures on the tricky Grand Prix loop, usually the final venue of the season, Esmee was a little disappointed to qualify on Pro-Am pole and eighth overall – a mark of how far the 22-year old has come this season.

Slipping back one place to start race one, she settled down and regained two places – on a circuit where passing is difficult – to finish seventh and first in Pro-Am, but had her sights set on something better later that afternoon.

Getting away well for the second 17-lap contest, she was locked in a battle for fourth place with drivers in the Pro class, keeping the pressure on Ross Wylie ahead right to the flag, being classified third for another podium finish after her rival was excluded from the final results.

Esmee now leads the Pro-Am standings by an impressive 18 points after four races, with a two-week break before she is next in action at Oulton Park in Cheshire, where she took her maiden victory last season. She will be on track for qualifying and the first of two races on Saturday, August 22, with race two live on ITV4 on Sunday, August 23 at 15:30 BST.

Meanwhile, fans can race alongside Esmee throughout the season by becoming a Silver Supporter, which not only earns an Esmee Hawkey signature cap and autographed photo, but also means their name is displayed on the roof of her Porsche 911 GT3 Cup Gen II machine. Supporters will also be entered into a draw to win hot laps with Esmee in either her Carrera Cup car or a Porsche Cayman 718 GT4 Clubsport. Head to www.esmeehawkey.com for further details.

“We came in on a high from Donington and I knew it would be tough to beat that weekend, so to come away with another overall podium is brilliant. We finished fourth overall in FP1 so proved the previous weekend wasn’t a fluke. For FP2 we worked on race runs, finding a good set up for Sunday’s races.

“Qualifying was tough and we didn’t quite get to where we wanted on the grid. Eighth was not awful and if it was the first race of the season, we’d be over the moon with it. I was happy with it though and we knew in the race we’d pressure those in front of us.

“Race one was tricky, starting on the outside of the sloped grid, so I lost a place and had to slot in on the right to get a good run up to Druids. I finished seventh overall, so we made up a few places and took another Pro-Am win but knew I could do a bit more than that.

“We had the right side of the grid for race two and got a really good start. I was running seventh, a few people slid off, and I was fighting with Ross Wylie and Mark Kimber. It was tricky because Ross was trying to pass Mark and I was trying to get past Ross too.

“Ross got past Mark but then there was a bit of contact between myself and Mark which spun him out sadly. That left me in fourth and just behind Ross, which then became another podium finish, another win in Pro-Am, and good points to take away from the weekend.

“I’m now looking at the overall results rather than just in Pro-Am. We came into the season having finished third in class last year, so we had unfinished business and, so far, we definitely have made progress. I think it’s important to push the Pro category and get the best results possible.”